Want to discover the essential Morocco? Our Essence of Morocco itinerary will suit those who love to explore and enjoy getting off the beaten track. While we will certainly visit the renowned medinas (Tangier, Chefchaouen, Fes, Marrakech), we will also dedicate time to less-visited but equally, if not more, beautiful areas.

For us, the essential Morocco, its essence, is its awe-inspiring natural beauty, its ancient civilisation, and of course its people. We aim to strike the balance with all three during an exciting itinerary North to South, packed full of contrasts and evocative of this timeless corner of Africa.

We don’t claim to visit all of the Kingdom in just 16 days, but should you wish to extend the trip we will propose various options, be it beach time or more mountains.

Arrival to Tangier airport and transfer the short distance to the Medina of the city, which dominates the port area. Overnight for this and the following night in a renovated town-house in the Medina, overlooking the port.

Tangier is quite unlike any other Moroccan city in that it was an international zone until the mid 20th Century, at the point of liberation from the French.

As you are spending two nights in Tangier, there will be time to explore both the town and further afield; we suggest a side visit to Asilah a short distance down the coast.

Explore Tangier in the morning and for the afternoon drive further south to explore the medina town of Asilah (approx. 90 minutes round-trip). 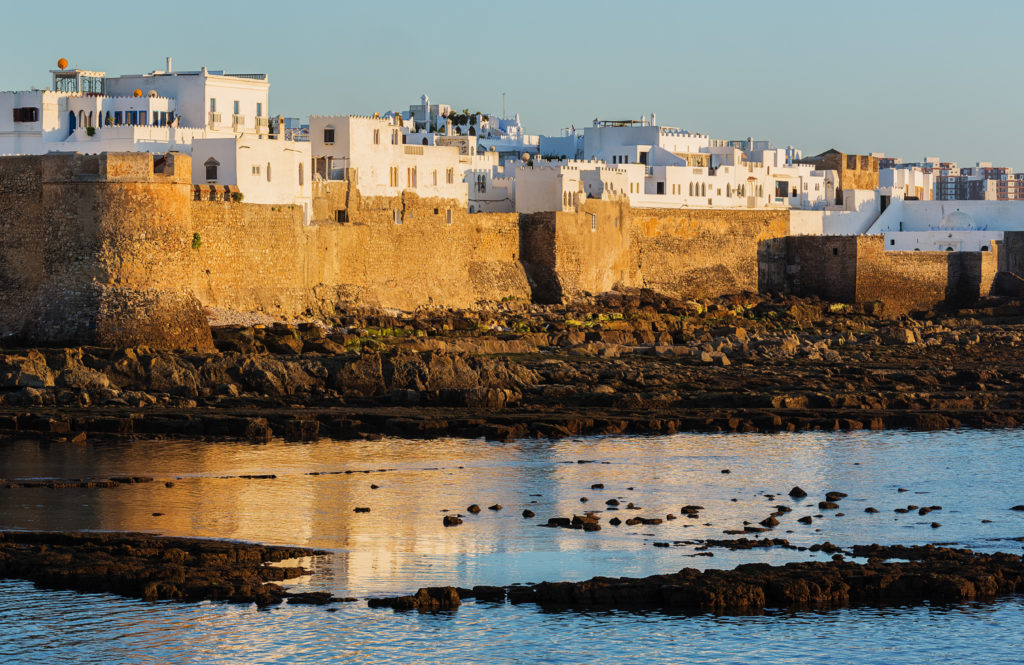 After breakfast, transfer south-east to the blue citadel of Chefchaouen, nestled in the foothills of the Rif Mountains. Arrive in time for lunch and then explore the captivating medina by foot.

Overnight in the town at a characterful guest-house. 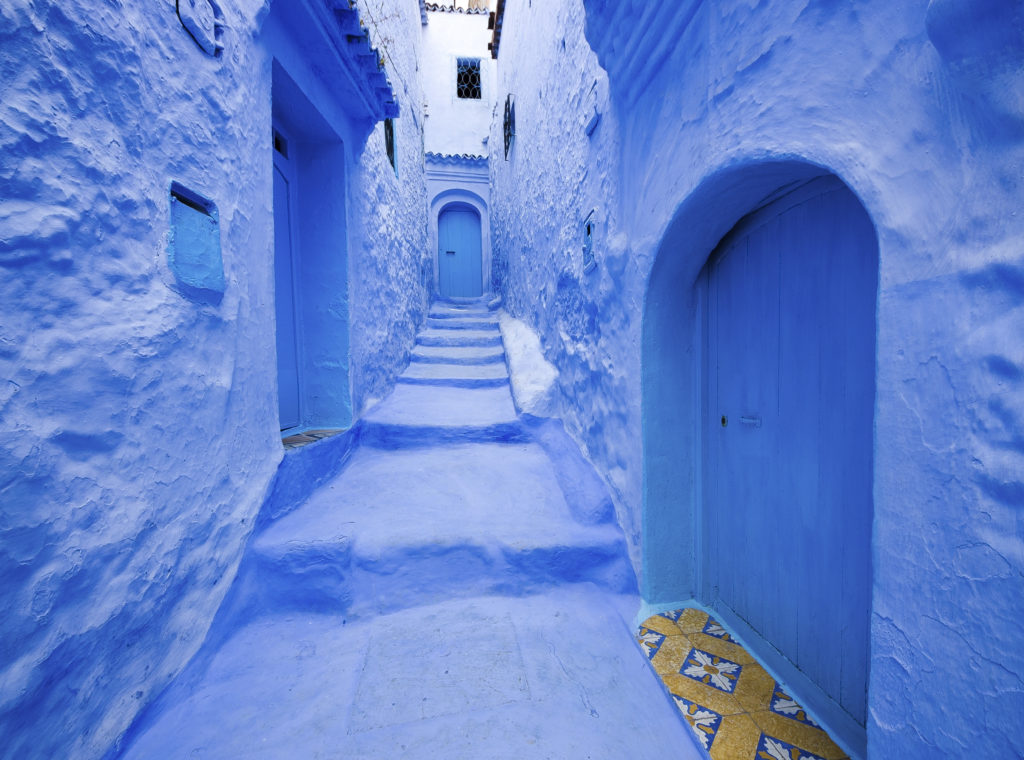 Aim for an early start to the day, today is a full day before reaching Fes early evening.

Leave the Rif mountains behind to descend southwards, stopping firstly at the Roman ruins of Volubilis. Explore the ruins with a local guide or on your own.

Volubilis (a UNESCO World Heritage Site) is home to the largest and most well-preserved Roman ruins in Morocco. Above, are its triumphal arches and basilicas, and below, the mosaic floors have been preserved and left in situ.

From Volubilis, drive the short distance to the holy town of Moulay Idriss (the town is on a short-list for nomination to UNESCO) where you will take lunch. The town is named for the founder of the first Muslim dynasty of Morocco and its shrine attracts many pilgrims.

Mid-afternoon, drive on to Meknes (also a UNESCO World Heritage Site) for a short visit.

In Meknes, the impressive monuments recall the splendour of a city first built in the 17th Century by the powerful sultan Moulay Ismail to rival the court of Louis XIV of France.

Reach the Fes medina by early evening. Check in to your riad, where you will overnight for this and the following night.

After breakfast, set out for a morning guided medina walking tour to allow you to get your bearings and explore the timeless alleyways. The medina is a UNESCO World Heritage Site and said to be the largest urban car-free zone in the world.

Highlights will be visiting the Imperial city’s medersas (the 14th Century koranic schools) which showcase the incredible craftsmanship and architecture of bygone Morocco (mosaics, cedar wood, stucco, marble, calligraphy all adorn such buildings). Other religious buildings are not open to non-Muslims but you will reach a viewpoint on a roof terrace to appreciate their scale and number – Fes has significant religious importance in Morocco as it was the seat of the founding Muslim dynasty.

Time-permitting in the afternoon, you may ask your driver to take you outside the city walls to one of the hills for a complete panorama of the Fes medina, which appears to sit within a natural amphitheatre.

Overnight in a riad in the medina. 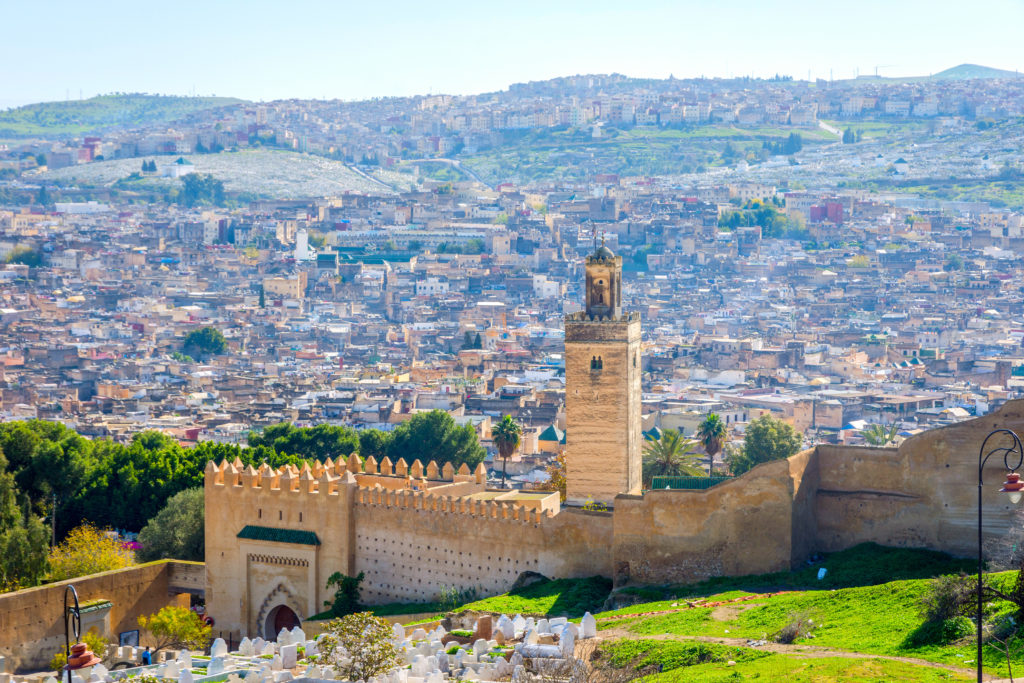 Early departure for the day’s journey through the Atlas Mountains to the Todra Gorge.

Leave Fes after breakfast to ascend to the High Atlas mountains via the cedar forests outlying Fes (and home to Morocco’s endangered Barbary Macaque species), the alpine scenery of Ifrane, and to the market town of Midelt. Travel through the evermore barren mountains on little-used roads to descend to the Todra River and its Gorge, before reaching the verdant palm oasis of Tinghir.

Overnight in a guest house at the palm oasis.

Travel today from the mountains to oases. Drive across the Anti-Atlas region of the Jebel Saghro (via the unspoilt Tizi n Tazazert mountain pass with commanding views) to reach the incomparable Draa Valley, home for the next two nights under the canopy of palm trees.

The Jebel Saghro is an other-worldly, volcanic mountain range. The scenery is punctuated by canyons, the occasional settlement, and stark mountains. To the south lies the Sahara desert.

On descending from the Saghro, reach the town of Nkob, home to numerous kasbah dwellings, which makes for a good rest break. Shortly beyond, reach the Draa.

The Draa is Morocco’s longest river, which once flowed continuously to the Atlantic Ocean. It is flanked by vast palm oases, traditional kasbah dwellings and compelling mountain reliefs. Spend two nights at Agdz, in one of the oases, and next to the river itself. The Draa is typically dry, yet flows once the dam upstream is opened, or after seasonal heavy rains. 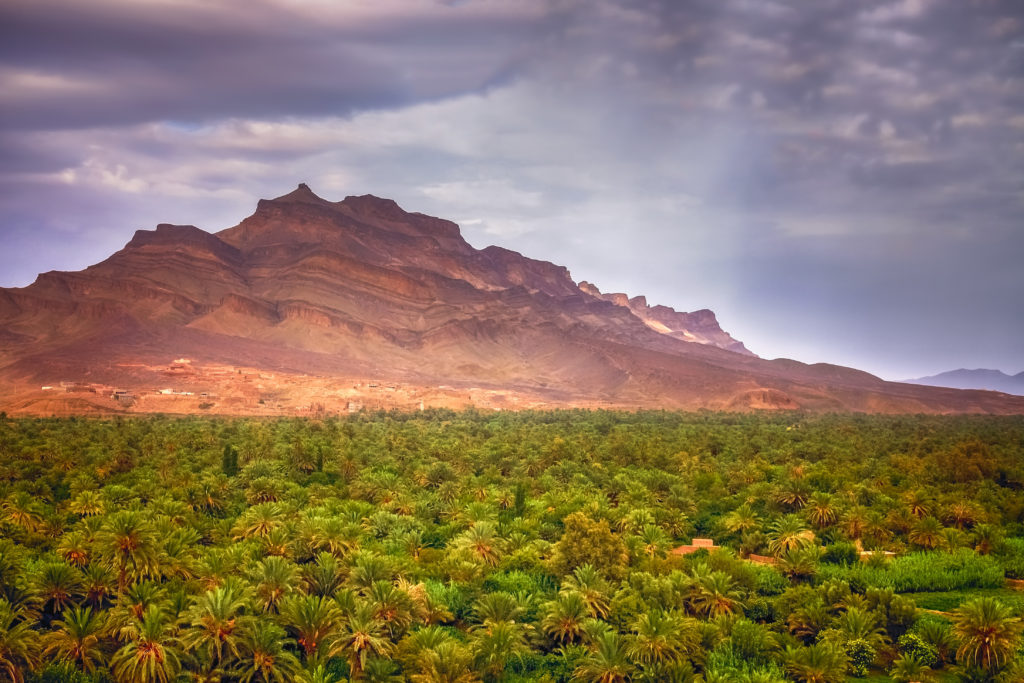 Spend a leisurely morning exploring one of the palm oases with a guide, walking amidst cultivation and simple dwellings. Thereafter, your driver will take you to have lunch in a Moroccan home.

Spend the afternoon at the hotel and enjoying the views all around. Or walk to explore one of the nearby kasbah ruins.

Drive south along the Draa Valley to the Sahara desert. The route south passes via Tamegroute, with the option to visit the pottery coop/library, and then M’hamid El Ghezlane (where the tarmac road ends). At M’hamid, have lunch in a restaurant, before your driver will take you to the old Ksar settlement, itself on the southern banks of the now-dry Draa River. Visit a home in the Ksar and enjoy the Moroccan tea ritual.

Expect to reach the desert camp during late afternoon. Late afternoon is spent exploring the nearby dunes by foot and camel-back. Trek to the tallest dune in the entire Erg. Enjoy the sunset from this unique vantage point, before returning to camp for a hearty Moroccan meal.

Overnight at the camp for this and the following night.

Guided day hike in the desert wilderness with picnic lunch under shade of trees.

As a reward for the day’s exertions, take tea with a nomad family at their encampment – your driver will take you there before returning to the camp for dinner. 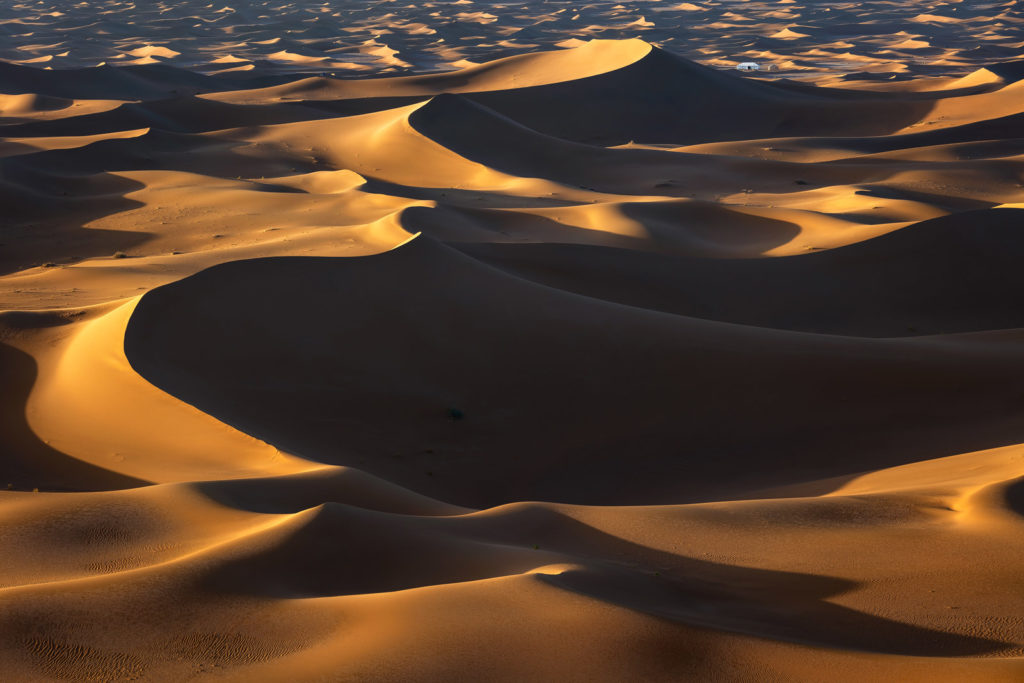 Depart the desert north-west, via the dried lake bed, Lake Iriqui, the Madouar canyon mountains and the Acacia groves. The first part of the journey is off-road and there is plenty of opportunity to stop for photos and a fossil hunt. Re-join the tar road at Foum Zguid and break for lunch. Then travel along the mountainous Jebel Bani ridge westwards to reach Tata and its palm oasis, in the midst of canyon reliefs and other-worldly geology.

Overnight for this and the following night at Tata oasis.

Visit the region outlying Tata and its palm oasis. For instance, Agouliz village and its Gorge, or the caves. 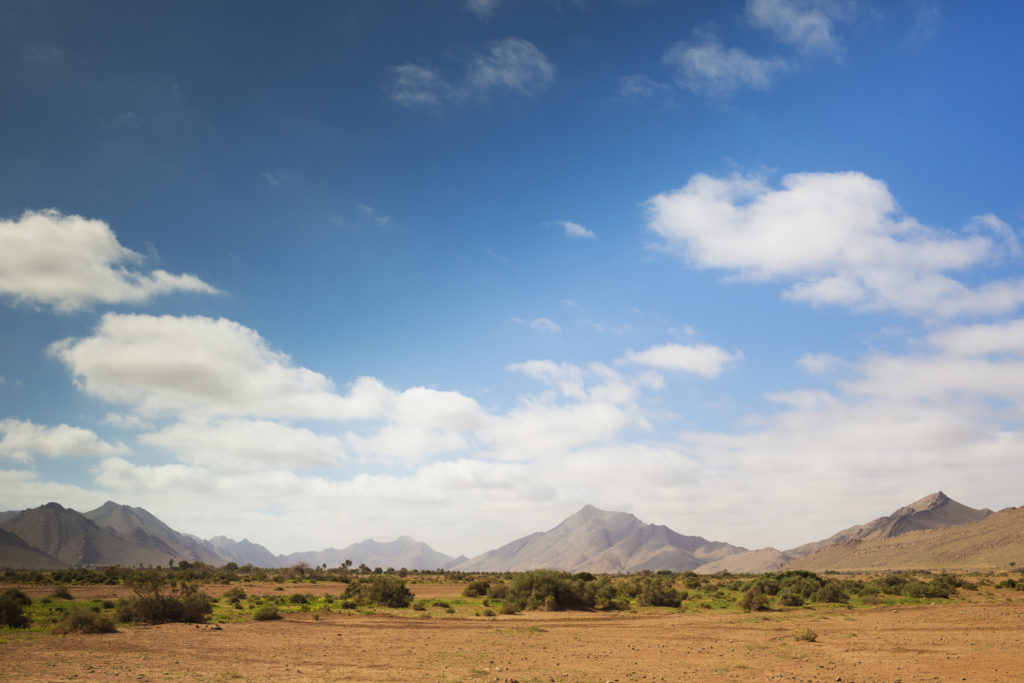 Today take in the scenery of the Anti-Atlas mountains as you drive northwards to Taroudant. The region is dotted with luxuriant palm groves, gorges and barren mountains. Not far north from Tata, stop to visit the ancient grain store (‘agadir’) of Tagmoute, a striking example of this type of earthern architecture (prevalent in the region).

Descend from the Anti-Atlas to the fertile Souss River plain, which sits between the Anti-Atlas and High Atlas ranges. The broad river plain is one of the bread-baskets of Morocco, the region cultivating citrus fruit, and vegetables.

Expect to reach the medieval, walled town of Taroudant by early afternoon. Taroudant has been described as the little sister of Marrakech and has a much smaller, less-visited medina.

Spend the afternoon in the medina, and take time to photograph the town’s remparts which have been restored.

You will overnight just outside the medina.

Another day of mountain driving, as you re-cross the High Atlas mountains, to reach Marrakech late afternoon. Travel via the adventurous Tizi n Test mountain pass (single track and winding in places, and with far-reaching views back down to the river plain below). On the approach to the mountain road, you will likely see some of Morocco’s famed Argan trees, before the hillsides become rock-strewn.

On the north side of the mountains the scenery becomes more verdant and the hillsides are dotted with small plots of terracing and earth-built homes.

Early afternoon reach the partly-restored ruins of the mosque of Tin Mal, dating back to the 12th Century and sitting in an isolated part of the mountains (NB: the site was part of a large town, itself not evident, which was the seat of the Almohad dynasty, please refer to below section on Marrakech). The mosque is on a short-list for nomination to UNESCO. A guardian will allow you to enter and explore at leisure.

The mountain scenery will become more alpine reaching Ouirgane valley, and, beyond, at Asni, you are able to see the highest peak in North Africa, Mt Toubkal.

Reach the Marrakech medina and check in to your riad, where you will stay two nights.

The Marrakech medina is a UNESCO World Heritage Site. Walk with a guide for the morning to get your bearings.

Marrakech, the ‘red city’, was once the confluence for the trade in gold, slaves, leather, etc, with sub-Saharan Africa. You will likely come across one or two examples of the ‘foundouk’ (or caravanserai) in the medina, former lodging quarters which housed itinerant traders and their pack animals.

The city has its origins in the 11th Century, but the remparts (walls) we know today originated in the 12th Century (subsequently re-built).

The imposing Koutoubia mosque and minaret also date back to the 12th Century, the golden age of the Almohads (ref: Tin Mal above). The Koutoubia minaret dominates the skyline, use it as a point of reference wherever you are in the city and you won’t be lost.

Amongst the ‘souks’, we recommend you visit the Maison de la Photographie, the Musee des Confluences (next to the Dar el Bacha), the Bahia Palace (19th Century) and Le Jardin Secret. The gardens in the new town (Jardin Majorelle) offer a respite from the bustle of the medina, your driver can take you early morning to miss the midday crowds. Arguably, the botanic Anima Garden out of town is a worthy rival to the Jardin Majorelle. 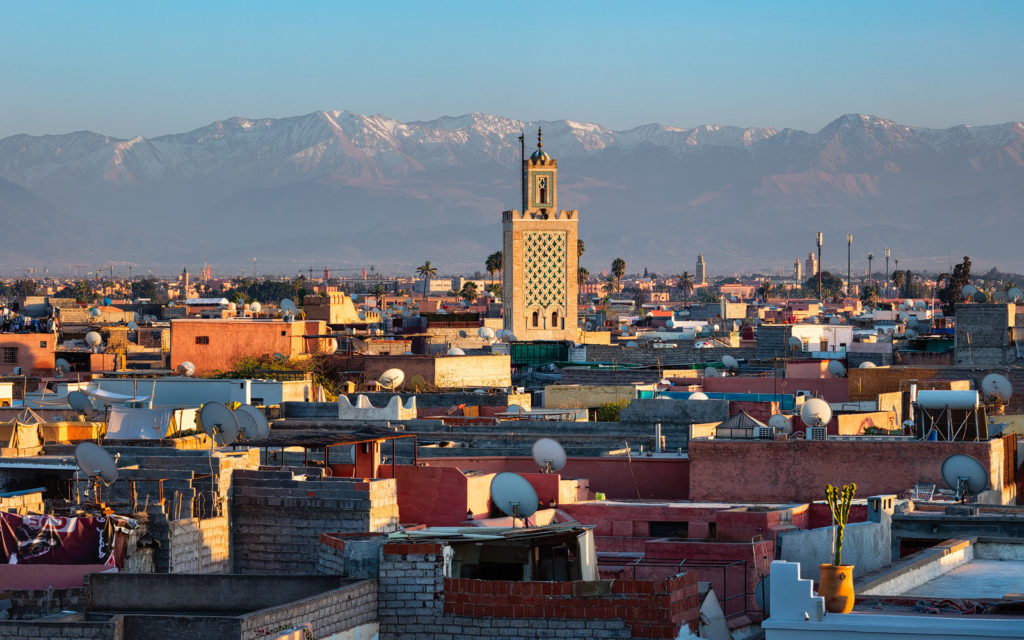 Transfer to the Marrakech airport.

The Erg Chigaga dunes is one of the best places in Morocco to view the night skies, being 60km away from the nearest light pollution, and still relatively unspoilt. This is one of the best locations in the Moroccan Sahara to experience true desert nights in relative isolation.

We include two nights under canvas in the desert, to allow for immersion in the rich environment. However, we can extend this by an additional night should you wish to hike an extra day in the Sahara desert.

Should you be interested, we will set up one of the two tent nights as a wilderness camp, instead of the fixed camp. Please enquire for the price.

Please contact us for further details about the essential Morocco and for a customised price quote.